Lomisa Monastery,the center of Lomisoba festival, was named after the Bull Loma, which, according to the legend, found the way home with the Icon of St. George fixed in his horns and brought Mtiulians (highlanders from the region of White Aragvi Ravine) from captivity of Persians home.

The Bull Loma went up the ridge between Georgian Ravines Ksani and Aragvi and died there – on this place they built a church, which is serving for the distant monastery (place for private devotion) for five orthodox monks, due to its inaccessibility – healthy man may get there in 3 hours through steep path (in summer time). The church dates back in the 9th-10th century.

It is safe location for travel even though is located on top of the range which divides Ksani and Aragvi River gorges and that range serves as an administrative border between the separatist region of South Ossetia and the rest of Georgia. According to an old legend the door of the church is on the Ksani River side, now on the South Ossetian side of the ABL, and the key to the door on the Aragvi River side, now on Tbilisi Administered Territory.

There is the assumption that the church initially was the pagan shrine dedicated to the moon deity, on the place of which the Christian church was built later.
Lomisa was the main shrine of the people living in Mtiuleti and Ksani River gorge. Very important political, military and economic issues were negotiated here. 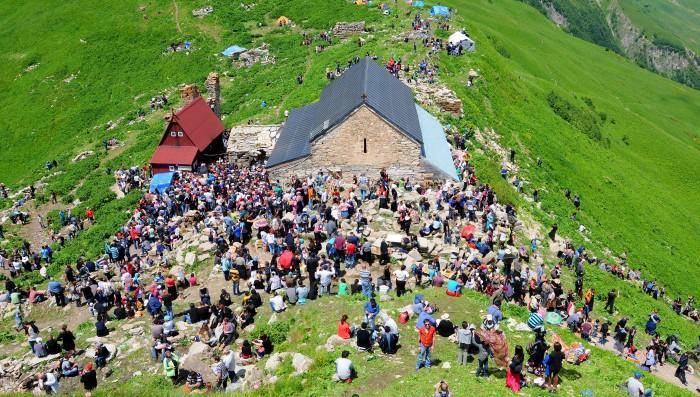 There is another legend connected with Lomisa, according to which in the 13th century, when the Khwarazmid army headed by Jalal-Ed-Din invaded the country, 7000 inhabitants of Aragvi gorge were taken hostage. The captured took the icon of St. George with them. According the legend the icon brought the drought to the Khwarazmid country. The frustrated sultan asked for magicians, which said that the reason for this disaster was the icon brought from Georgia.

First Sultan ordered the icon to be burnt; however, it flew out of the fire, placed of the horns of the white bull. The bull with the icon did not move, until the last host was set free.  So, the 7000 Georgians started to move back to their homeland. In every place they stopped they have built the niche-shrine. Finally after the long way, the icon settled on the Mountain in Mleta, where the Lomisa church stands now.

Later this place has been piligrimised by the daughter of noble Dadiani, which brought the huge heavy chain with her shoulders up to the church. Another story tells that St. George has miraculously saved one of Georgian hostages and as a sign of his appreciation the saved one has devoted the chain to the Lomisa Church. This huge chain is still found in the church and everybody can put it on the neck and make a wish. 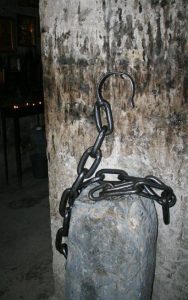 The festival is held on the 7th week following the Easter. On this day lots of people walk up the mountain, put the 8kg chain on their necks and make a wish to St.George. There are Georgian feasts held. As well as medival pagan tradition of sheep slaughtering which is banned by Georgian orthodox church but people still practice it beleiving that St. George will help their beloved ones after they have made a sacrifice. 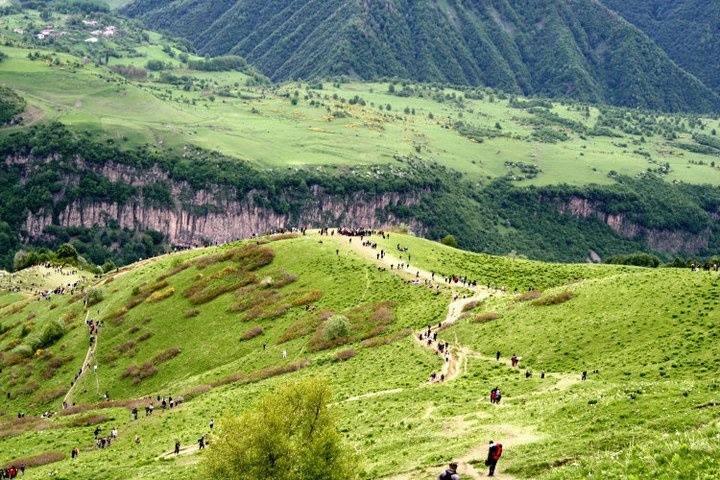 May-October; Although except festival times hiking to lomisa church can be a nice hiking route during spring (May-June) when mountains are all green or in winter with a special equipment when it’s all covered with snow.

How to get to Lomisa Church

In the winter Lomisa church is one of the favorite skitouring destination for the people staying in Gudauri. Drive from Gudauri takes just 40 minutes. Then people are hiking to the peak with the skis. There they meet local monks, rest there, recharge spiritually and physically and then ski down from Lomisa to Mleta village. Total Duration is 4-5 hours and 800 meter vertical.

Pankisi Gorge Hiking – Tbatana – Camping at the edge of the sky