Most Romantic village of Georgia – Parsma & the Legends of Hegho 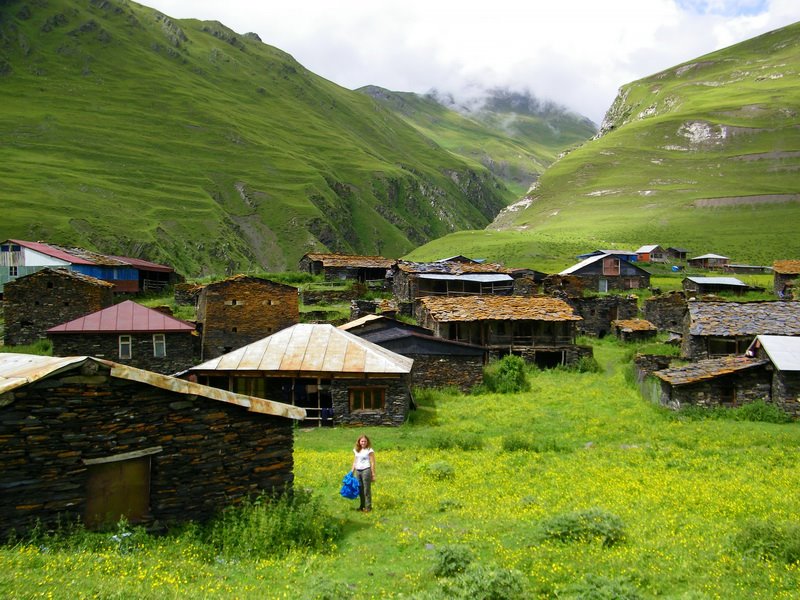 Going to Tusheti you feel closer to God, paradise like road brings excitement and fear, happiness that you are blessed to see all this beauty and fear called Memento Mori. The road to Tusheti is so beautiful that you cant believe what more passion can villages above bring – but some villages like Parsma leave all questions behind. In this village, little high above Dartlo-Girevi road, I feel spirituality, peace of soul, serenity, its romantic like Prague of Tusheti. Shrine of Parsma collects all our prayers which have not reached yet its goal and were lost in wind, flowers, stones, years.. and puts on the right path. 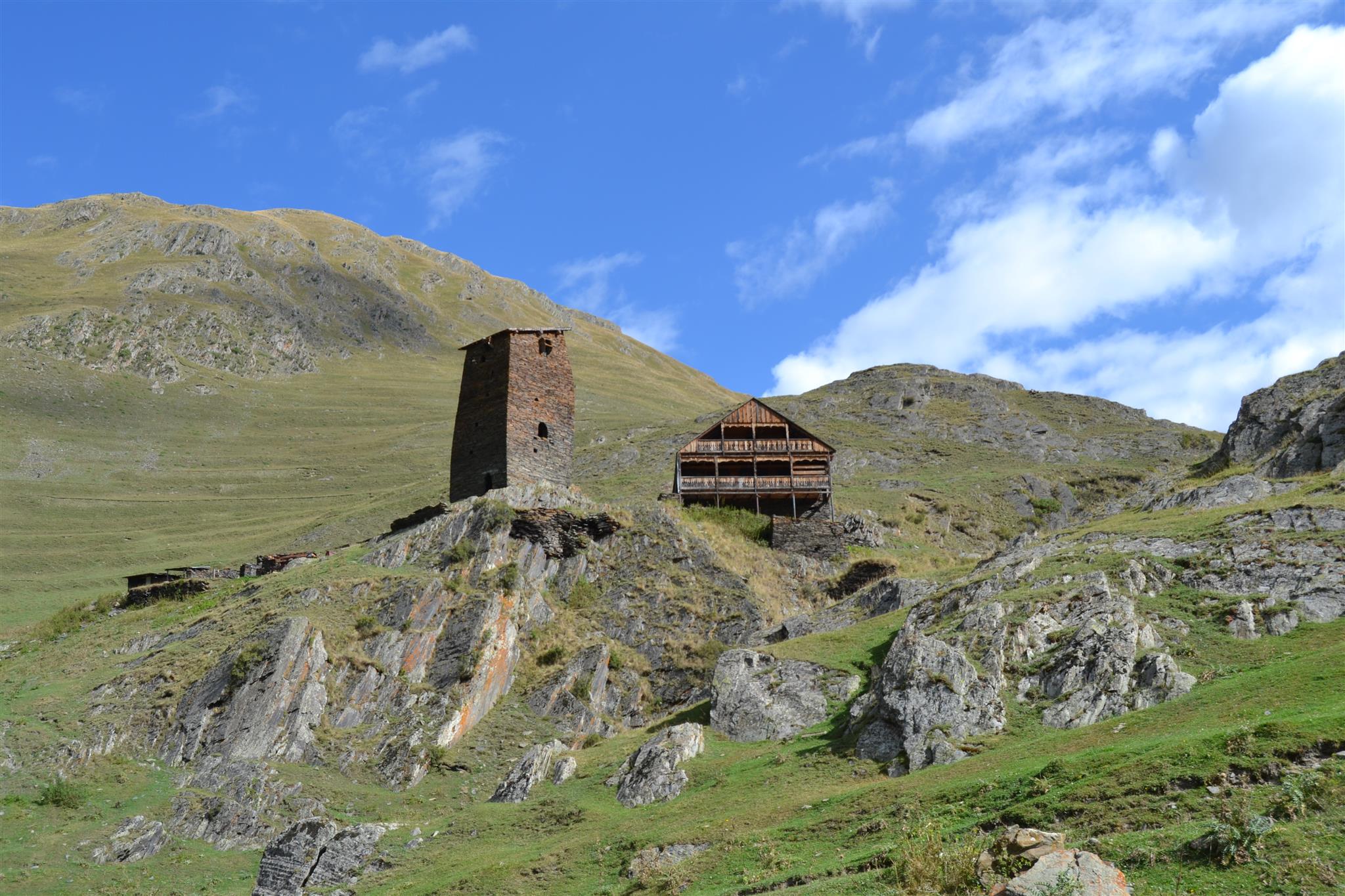 Parsma From the road (August) 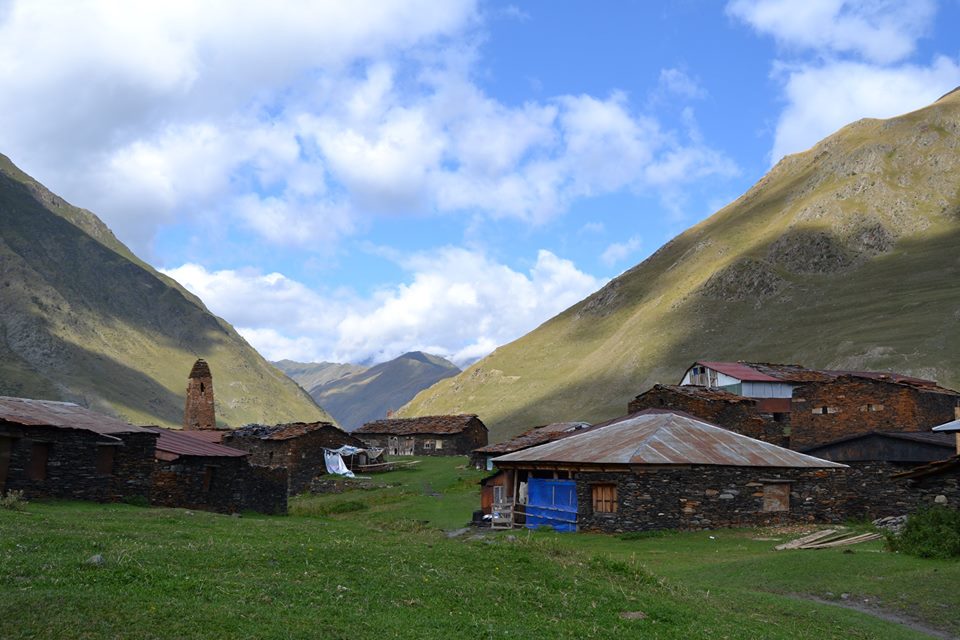 There is less to see and more to feel, walking between towers and old houses of Dartlo and enjoying its panoramas and spaces, but I will mention that it has 1 Tower built with help of Kist (Chechens),  3 towers (2 of those represent 6-floor house and 1 7-floor house) and standing together overlooking river gorge, Icon of Theodore (khati) south east of village, house where beer is still brewed as well, if you go in spring -late June-early July – you will have beautiful flowers around as well. 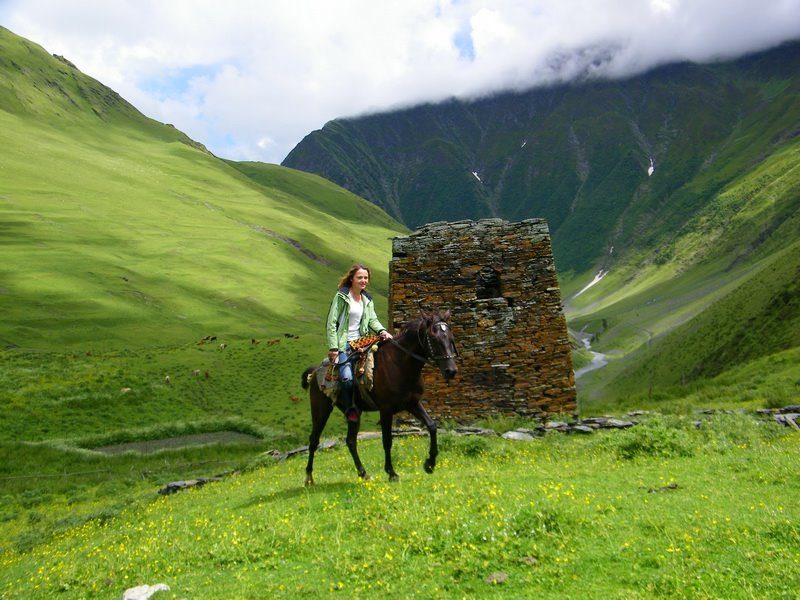 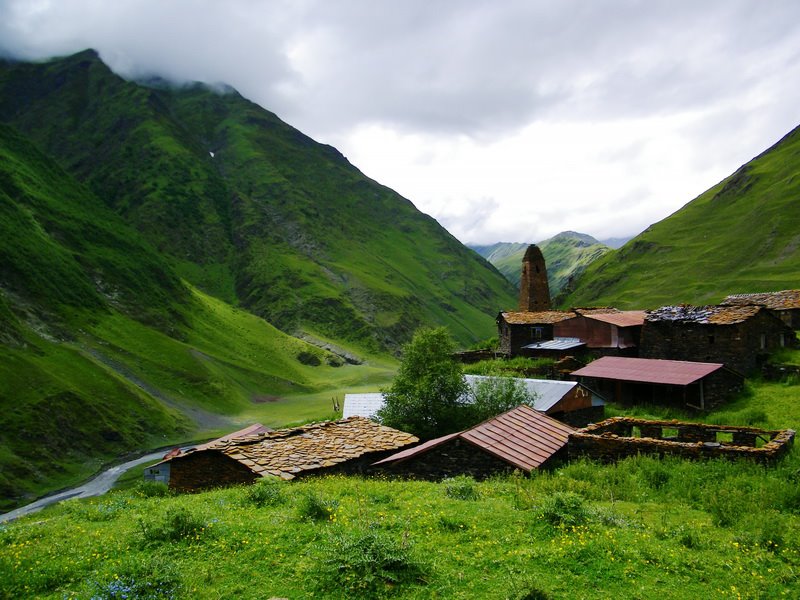 Beyond Parsma there is village Girevi from where Atsunta route starts and also there is a border post so tourist may not notice very impressive fortress across river which is called Hegho. Its located on a high mountain near the confluence of 2 rivers – Larovanistskali and Kvakhidistskali. A village nearby  had suffered plague and all people left themselves to die in the towers, then 1 baby was saved by a passer by shepherd and grown up survivor established Hegho. Defense towers were built later, making Hegho strong defensive village against nearby enemies. According to the legend John the baptist shrine from village Zemo Alvani (Tushetian lowlands of Kakheti) angered on locals who were sacrificing him pigs and chicken (not sacred sheep) and went up to Hegho. It was the strictest and strongest icon of the area before mid XX century when village was fully abandoned and locals took shrine back to Zemo Alvani village. 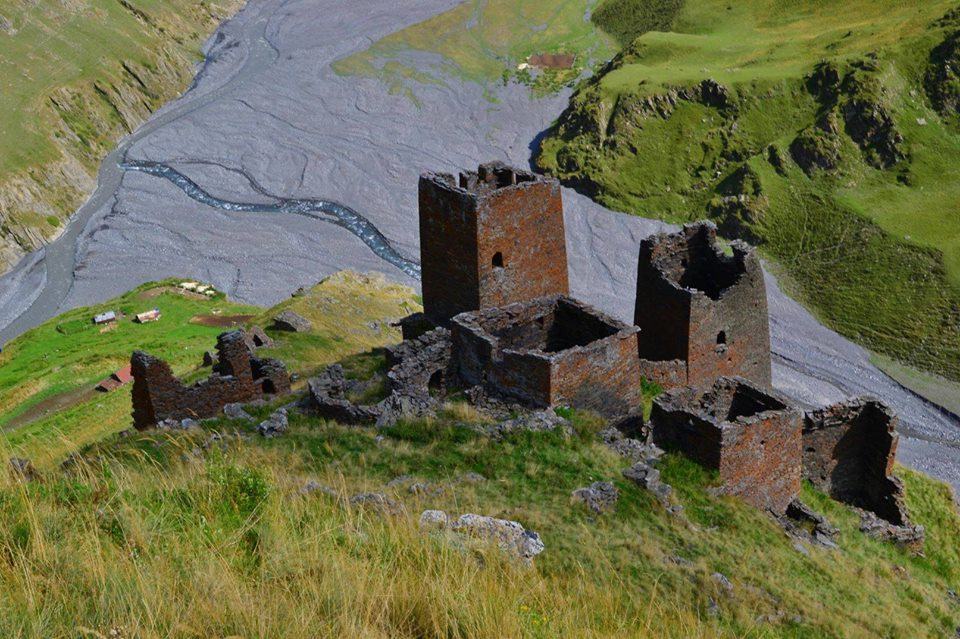 There is a defense tower with pyramid roofs where community flag is still stored. During times of war, the flag was put above tower and during times of peace, they put cross above it. It is also several-floor tower and has holes for arms. Even though Hegho had great defense capabilities, it was the first to meet intruders, so its one of the reason why from 300 people local community population went down to 12 in the last 19th century. Hegho was often defended by local amazons – women fighters. Hegho legends tell us about 1 hero woman who did not fear death and went up ,,balcony” above tower and shot down enemies. One of the poem on other hand tells that once upon a time local women of Hegho were defeated and captivated. Then people from 3 fortresses (Dartlo museum reserve area),people from Pshavi who came via Borbalo-Alaznistavi passes to Hegho, Khevsurs via Atsunta pass-Kvakhidi area, surrounded enemy and freed local women. Now those pathes which other Georgians traveled to help locals of Hegho are very popular trekking routes. 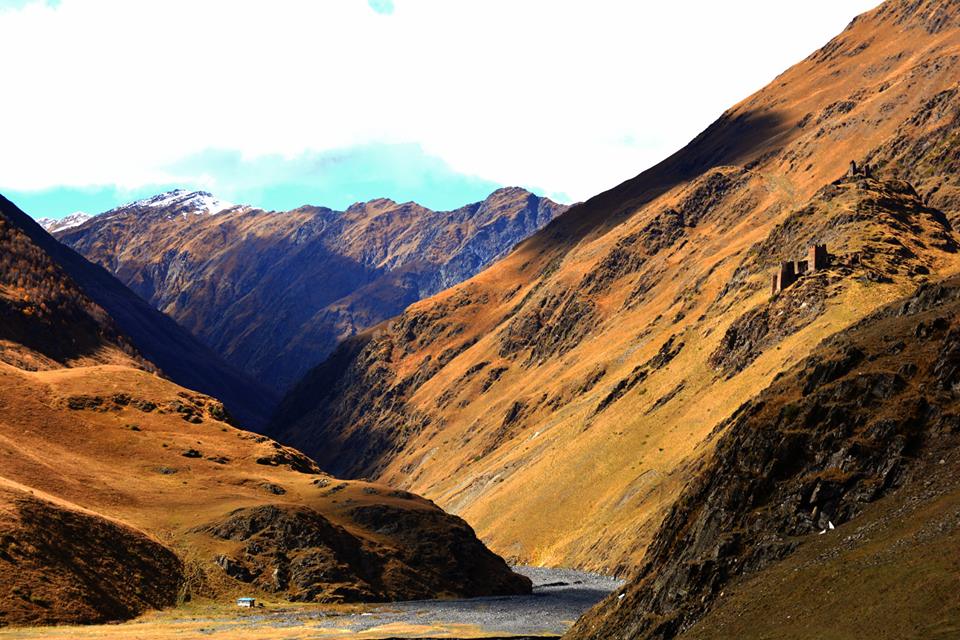 The legend is related to the builder of the village wall which surrounded the fortress. Dagestanis attacked Hegho and could not do anything about its towers and defense and the wall. Then they sent people to ask for secret of construction to architect who was Dagestani as well (Lezgin), he was a honest person and had vowed not to tell the secret. Then local mullah released him from his word. Enemies took out 1 white stone from the wall and the whole wall was demolished, then they raided the village. Zurab’s tower which stands highest in Hegho was also attacked, Dagestanis lighted up fire and demolished the gate. Zurab died during shooting. His son Mikela and women of the family were continuing to fight against multiple enemies. Without help, Mikela had to surrender, but for him it was worse than death. So he killed all his family members and went out of tower with his sword to kill as many enemies as possible and died.

You can never say where truth ends and fantasy of Tushetians begins, but when you will hike up Hegho, you will believe all these legends, with its tombs, towers, surreal environment it allows you feel like this. Its breathtaking and spectacular – incomparable environment and old towers both in Harmony will double your passion and love of life. Locals coming up to participate in pagan rituals thanking God in Hegho will add some more spirituality to you or at least some alcohol.  They bring shashlik, drink and make toasts, have candles lighted up and ring church bell, repeating May it (Khati – holy shrine) bless us. Just like the last toast of Georgian supra (Georgian drinking tradition), is ,,may all holy places bless us”, holy places are where people no matter of their religion, go (up) to pray and even if you are not religious, Tusheti gives enough powers to communicate with God and helps you find your eternal spirit filled up with shared love and positive energy from humans  and from mountains. 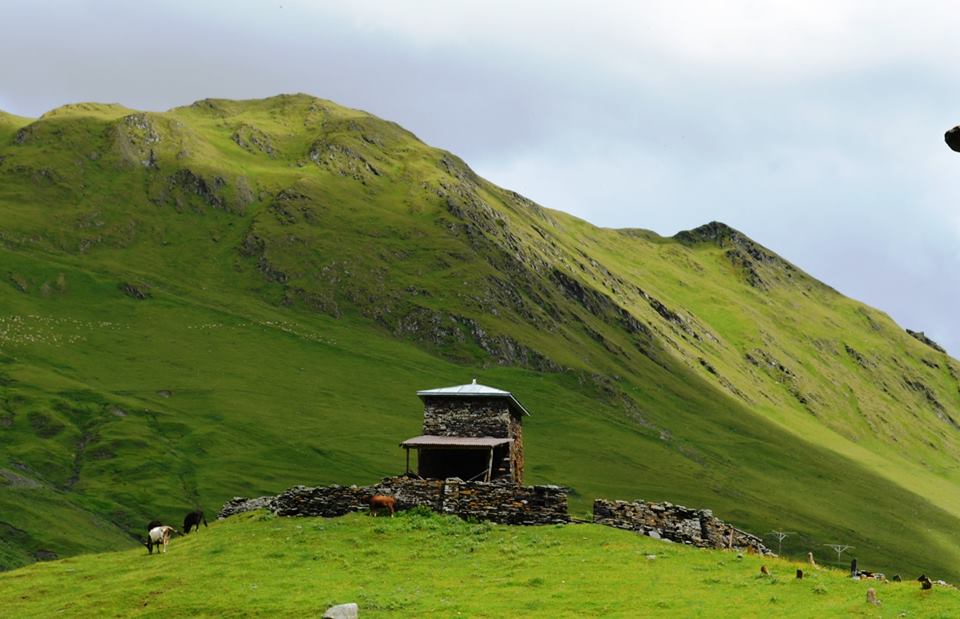 Legends were collected by experienced and knowledgeable guide of Georgia Shalva Nakaidze. For the map please see: