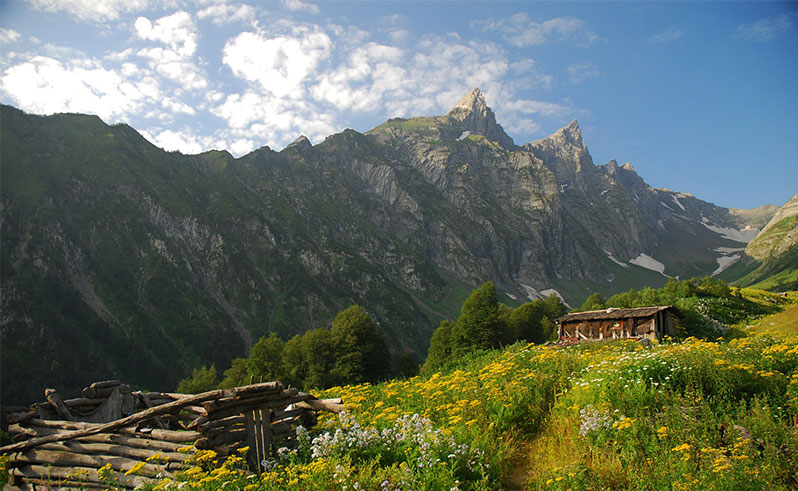 Views to Shoda-Kedela range are highlights of my hometown Oni, so since early childhood I have seen it in all type of weather, admired it and even painted it. But the story is not from childhood, its from 2016 when I was already 29 years old and took my friends and my pregnant wife to Racha trip.

One of the days of trip our goal was to approach Shoda summit from the most spectacular side.Its lagora huts or Laghora (ლაღორა, ლოღორა) huts or you can say Shoda huts, which can be accessed from village Patara Ghebi. We did not know exact distance and planned it as a dayhike (it can be a great dayhike but surely not for pregnant woman).

We started the hike in the Ghebi village, walking towards mobile network towers, then few hours through some meadows and a dark forest. Then rain started and also bothered us, then we made it to St.George church where locals (all with Gogrichiani last name) were gathered to have a celebration with fresh sheep barbeque and white wine covered from rain in a blue tent. I really enjoyed drinking there but soon realized that my wife was nervous as she was not allowed to hike that much by doctor.

So we decided to sleep at Lagora huts which is not really a place to sleep, ugly abandoned 1990s abandoned huts. Besides, we did not have a tent, sleeping bags or some of us even enough clothes to change – after heavy rain. The next challenge was to make a road through high hogweeds with an axe.

Finally we made a fire, had Georgian style drinking of Chacha, made up new songs, played games and managed.We made a fire, had some drinks, sang songs and played games. It was a very special night with the two of us and we couldn’t wait for our baby Sofia to be born and be as active, crazy and loving as we are and to take her with us on hikes, expeditions and go wild as we do… 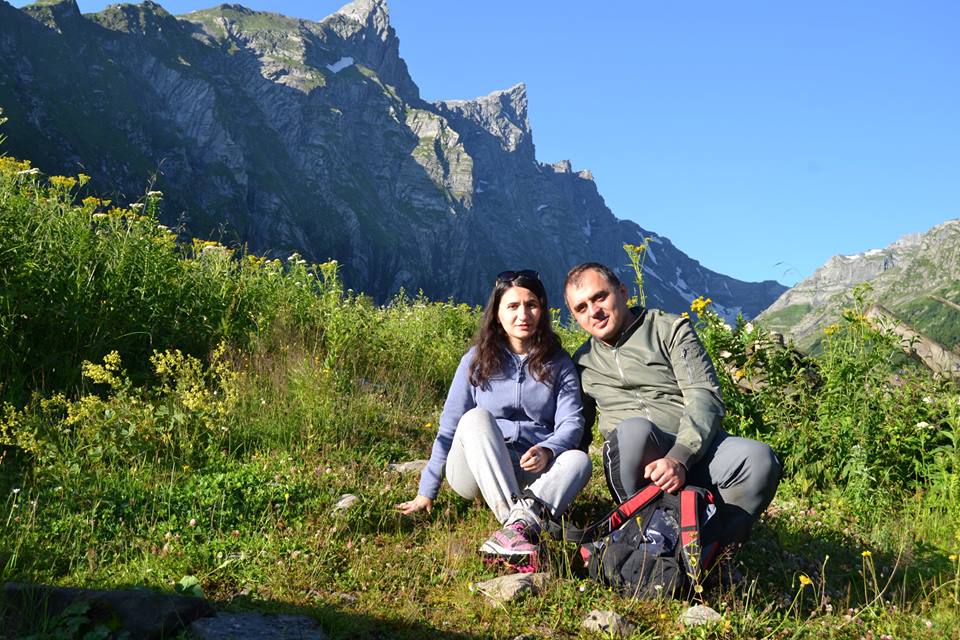 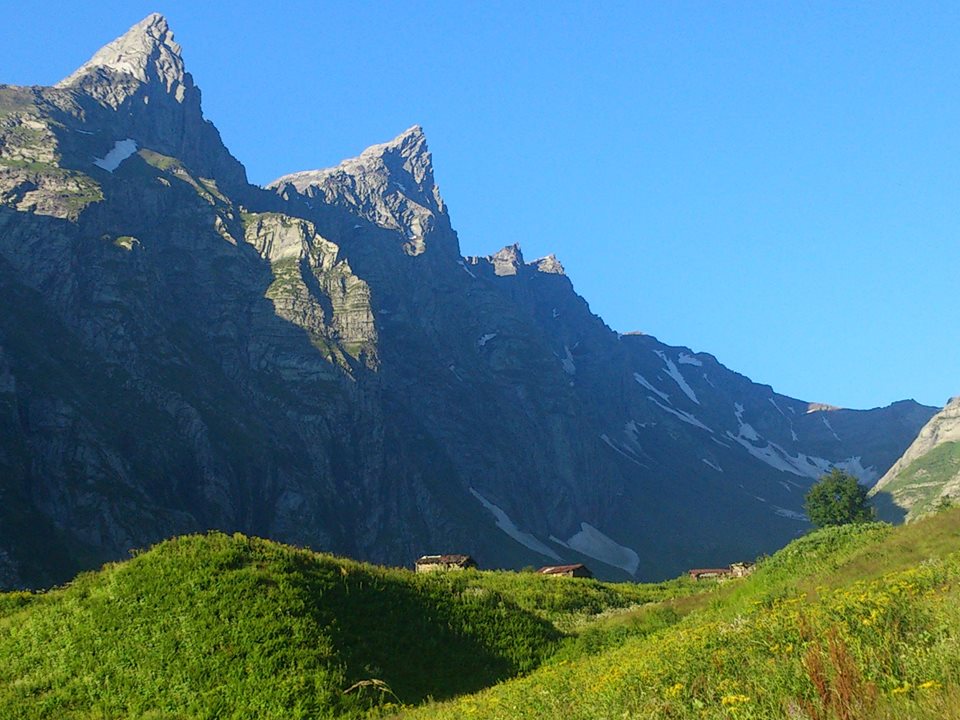 Ghebi is the main village in mountainous Racha and just like Mestia in Svaneti its the base for hiking around in Racha. In comparison to another base Shovi resort (Glola village) Ghebi has more typical hardworking village people and regular forests, while Shovi has more beautiful pine forests and people are less involved in agriculture in comparison. Ghebi used to be tower village just like Mestia, but towers were demolished during soviet times replaced with more practical houses. To get to Ghebi you need to get a taxi from Oni (how to get to Oni you can see at the last section of this article), public transport only works on Thursdays and carry market people.

One of the easiest routes are Lagora huts hike which I described above and Mt. Mukhamesh hikes and as those 2 are in 2000s range, both can be hiked in late Autumn as well or as early as late May depends on winter, and with snowshoes even in winter. In summer hike can be extended what you can see in main map to trekking towards Sakao village across Shoda-Kedela range. Ghebi-Sakao trek is very hard and cant be done without locals or without proper equipment/experience. 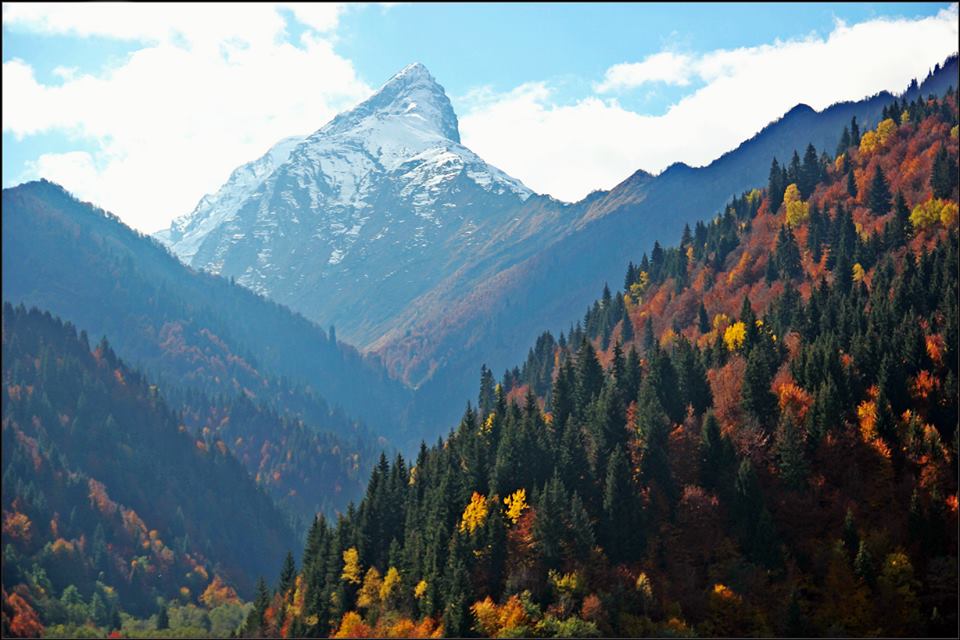 The name of mountain itself as I have heard in my childhood, is connected to legendary Gilgamesh (Mesopotamian epic). Mukha means an oak in Georgian which is considered a sacred tree.  So Mukhamesh was another name for Gilgamesh, just like Prometheus as another name in Georgia – Amirani. I have also heard that Mt. Shoda is also mentioned in the epic (the mountain area Shadu), also Glacier Edena which is the name of glacier in Ghebi, Racha is connected to Eden mentioned in Mesopotamian epic and then in the Bible.

ou may not believe this theory just like Old song from Racha – “Ra-shovda” is song to old Egyptian God Ra, but its true that some of the mountains in Racha (elsewhere in Georgia) just like Lagora where you have St.George church standing on the hill, are holy places = where people go to pray no matter of their religion.

Georgians liked to select the best places for worship and believed you sometimes need to make an effort and hike to the top of mountain/hill to pray better and to be closer to God. Even if you dont believe in cosmic energy which is created by humans talking to God, you will believe in Georgia, as the last toast of Georgian supra is for the holy places after tens of toasts and hours of sharing wine and words of love. 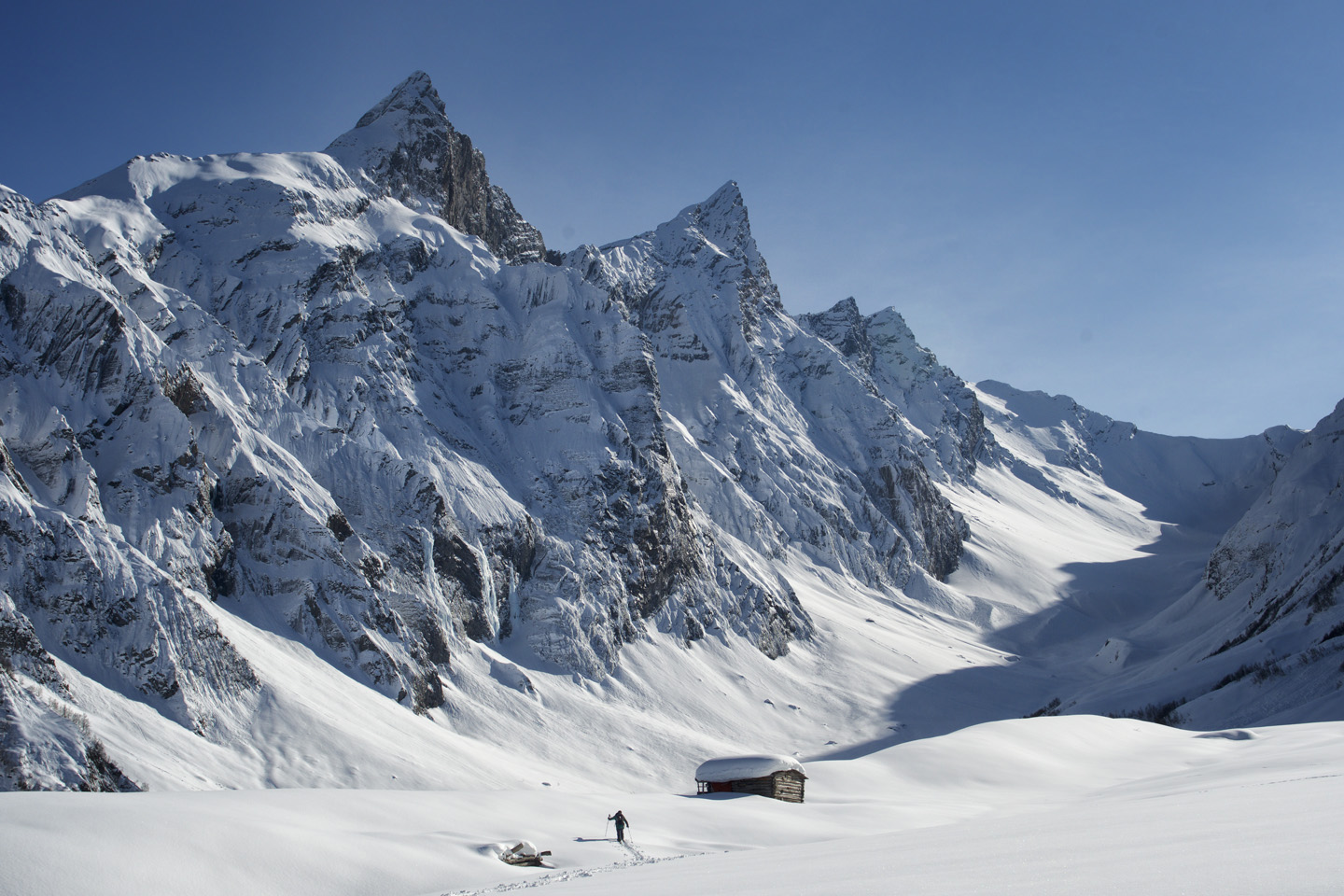 Hike to Gona village Then get to glacier of Kirtisho.

But you need permit from border department which can be arranged in Oni or at the border post in Gona as well but not 100% sure. Road to Gona is quite hard for any car, few sections are stony and i think its an easy hike to Gona if you have time, if not you can take taxi there.

Its better to take a taxi or horse to cut some road (not interestig sections) for the hikes of Rioni River source (Pasis Mta), Zopkhito Glacier and Racha to Svaneti trek – all three are in the same direction west from Ghebi-Tevresho and Brili area. If you have time you can always hike all the way of course. All these hikes can be interesting and worth doing. So Ghebi village offers you unforgettable adventures.

For the Gps Track of standard easy hike please see:

and for the full route (harder version) you can see in the main map for Racha: