The capital of Georgia and the key to Caucasus 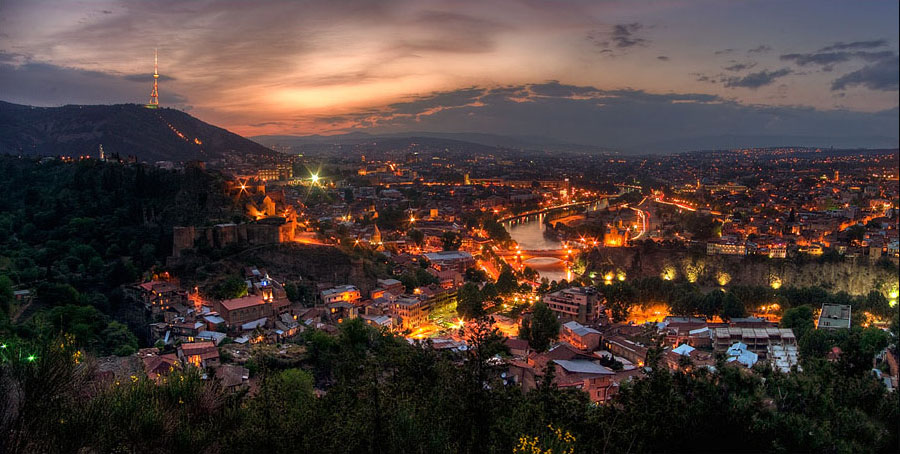 In 2008 Tbilisi celebrated its 1550-year-old anniversary. It means that the history of this amazing city throws back as far as the 5 th century when the Georgian tsar Vakhtang Gorgasali ordered to build a city in the centre of the fertile valley cozily lying between two Caucasian ridges. The city’s name was not incidental. It originated from the word “tbili” – warm. In fact the plain between Mount Sololaki and Metekhi cliff, where the city is situated, is rich in warm sulfuric springs. There is a beautiful legend connected with the city’s beginning. It runs that Vakhtang Gorgasali and his train hunted in dense woods. Suddenly they saw a pheasant. The tsar sent his falcon to catch it, but both birds disappeared. After a long quest the birds were found boiled in a hot spring gushing from under the ground. Dumbfounded Vakhtang ordered to build a city on this very site – on the right bank of the river Kura (Mtkvari).

It was back then that the known aphorism was born: “the Key to the Caucasus is in Tbilisi ”. Still it is now: You can start exploring The Caucasus from Tbilisi as trains, taxis and marshutkas run to connect Tbilisi to Baku and Yerevan, borders to both countries are around 1 hr drive from Tbilisi. Tbilisi is the place where you can sit in the Azeri chaikhana run by Armenian  who speaks all 3 languages. Tbilisi is the sacred place for all Caucasus having all cultural flavors in 1 and hospitable to all.

In the Middle Ages Tbilisi was a prosperous city. It was a home of remarkable poets such as the genius Shota Rustaveli and many others. Foreign poets were also inspired by this wonderful city. Pushkin who was deeply impressed by cordial reception he experienced in Tbilisi named the city the “ Fabulous Land ”. There Lermontov wrote his well-known ‘Mtsyri”, Griboedov – “ Wit Works Woe” , Tolstoy – “Childhood”, Gorky – “Makar Chudra” etc. All this is explained by the city’s poetic spirit and the unique aura.

The combination of original architecture and natural beauty gives it inimitable charm and color. Tbilisi stretches in a narrow strip on both banks of the Kura . Its narrow curved streets run up the slopes and round the mountains ridges. The houses matching the relief are located on the slopes of the mountains arranged in terraces one above another closely adjoining each other. If you look at the city from Mount Mtsatminda you will clearly see them climbing the slopes of the hills on the both banks and cluster near the rocky precipices.

Since the early 19th century the central part of modern Tbilisi arranged in rectangular blocks- the New City – has significantly grown. The modern city harmoniously combines antique and contemporary features: the temples of the 6 th – 7 th stand near modern high-rise buildings, wide avenues, are, gardens, boulevards; magnificent bridges connect the right and the left banks of the rapid Kura.

But the soul of Tbilisi still dwells in the Old town. The quiet winding sunny streets, to terraces of the houses wreathed with vines, ancient churches with tiled domes, the ruins of old monasteries, traditional Georgian yards with intricate carved porches are simply irresistible. A part of your soul will stay forever in this charming nook in exchange for a little piece of Tbilisi which you going to take with you…

Must Try in Georgia – Adjarian Khachapuri