Must Try in Georgia – Adjarian Khachapuri 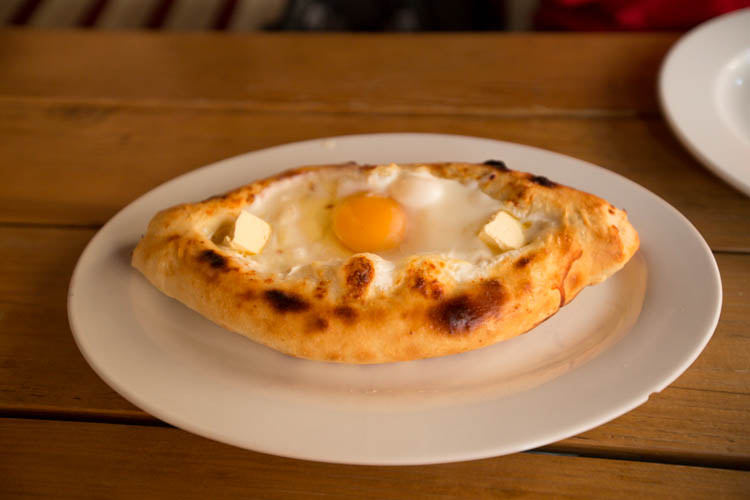 Khachapuri, Georgian bread stuffed with melting cheese, eggs and butter, is one of the most famous Georgian dish. It comes in many varieties, most regular is Imeretian with a round shape, also Megrelian with some cheese added over, but the top dish of Georgian cuisine which foreign tourist must try is definitely Adjarian Khachapuri (Acharuli).

Acharuli is the one where dough is formed into an open boat shape and is topped with a raw egg and butter before serving. Originally coming from Adjara, which is seaside region, it has a form of boat from the black sea – and egg over it is the symbol of the sun going down in the sea. for the recipe you can see.

You can try Adjarian Khachapuri (big one) if you want in restaurants of Tbilisi such as Machakhela, but the best place to eat Adjarian Khachapuri is in Batumi, Seaside Adjara. If traveling to Mountain Adjara or Bakhmaro resort later, you can try some other Adjarian dishes such as Sinori (specially-baked dough that is combined with Georgian cottage cheese and butter), Kaimaghi which is Adjarian sour cream in its finest taste in Adjarian mountains or fat shepherd’s food Borano made from eggs, cheese and corn flour. For more information click here.

How can you eat Adjarian Khachapuri? Actually it’s an art – follow the rules, otherwise you may not enjoy it!