Georgia ranked 4th after Italy, France & Spain in ,,Eat and Drink in Europe” 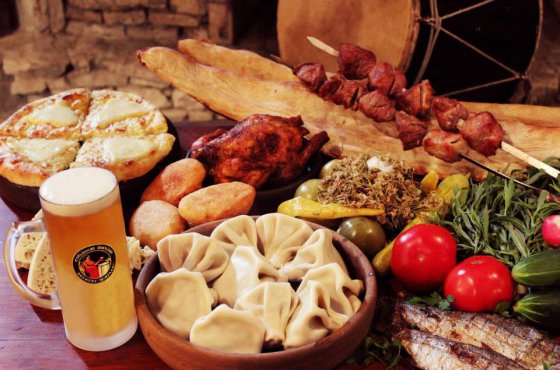 Georgians consider their food as one of the best and we are always happy when our guests recognize it, when they are happy to eat Georgian food, go to Georgian restaurants and even toast like Georgian.

In the ranking issued by thrillist.com Georgia ranks the 4th among 48 European countries (authors KEVIN ALEXANDER AND LIZ CHILDERS have visited 39 of 48 on the list).

Their impression about Georgian food is the following:

,,Georgia sits in the middle of the ancient spice route between Europe and the Middle East and Asia, so the country’s dishes are imbued with an incredibly rich and unique use of herbs & spices, like cilantro and dried marigold, that are used in combinations not seen in the other individual regions and are layered for bold, but balanced dishes. And the pinch-hitter of those dishes is khachapuri, a boat-shaped pastry filled with a glorious amount of melted cheese and a raw egg. It’s so popular that the country’s trying to trademark it so places like Panera don’t steal it when they realize HOW MUCH BETTER THE BREAD BOWL CAN BE.Also in the lineup: khinkali, the twisted dumpling knots that’re filled with pork, beef, or lamb and laden with all those spices, plus onions; kuchmachi, which is one of those dishes where you should not ask what’s in it (hearts, gizzards, and the like) and just savor the deep flavor of pork, fried garlic and onions, coriander, and bright pomegranate seeds; or chahohbili, a peppery, sweet chicken stew. Cheese is abundant (obviously, they put it in bread boats), and tkemali, a plum sauce, accompanies a slew of meat dishes and is, of course, laden with coriander and cumin and peppery bites.”

For the full version of the article please visit:
http://www.thrillist.com/eat/nation/the-best-places-to-eat-and-drink-in-europe

I am sure all opinions are subjective but generally allmost all my foreign friends have enjoyed Georgian food so far.

Martvili Canyons, Beautiful Salkhino Garden and Other Places to Visit in Martvili