One of the most popular Georgian dish – Khinkali, most probably came to Georgia during Mongol rule in the 12-13 centuries, but Georgian Khinkali is quite different from its Asian ancestors. Its most tasty part is its juice inside with special flavor. Most Common Type of Khinkali is Kalakuri. But there are also some other varieties with pork, beef or lamb (sometimes mixed pork and beef), there is also with cheese or mushrooms for those who are vegetarian.

Chopped/grinded meat stuffing, parsley, onion, coriander, pepper and salt are common ingredients of Khinkali. You can see the recipe here.

The most common place where tourists try khinkali is in old Tbilisi restaurants possibly after hiking up the Narikala fortress or visiting the most famous Georgian sulfur baths. Khinkali should be tried hot along with shot of vodka (or red Georgian wine) adding some black pepper. If some of your ordered Khinkali gets colder you can ask to get it fried.

Although as Khinkali is common food for Eastern Mountain regions, such as Mtiuleti, Pshavi, Khevsureti, the most best time to try would be at locals, during their holidays or festivals. You can eat different type of Khinkali in Pasanauri, on the way to Kazbegi. The difference is that meat is not grinded -it’s chopped.

Eat khinkali to the following rule:

Khinkali take hold of the “tail”, holding with other hand or fork, bite a little and first drink the hot delicious soup. Then eat the rest of the khinkali, leaving the tail on the plate. 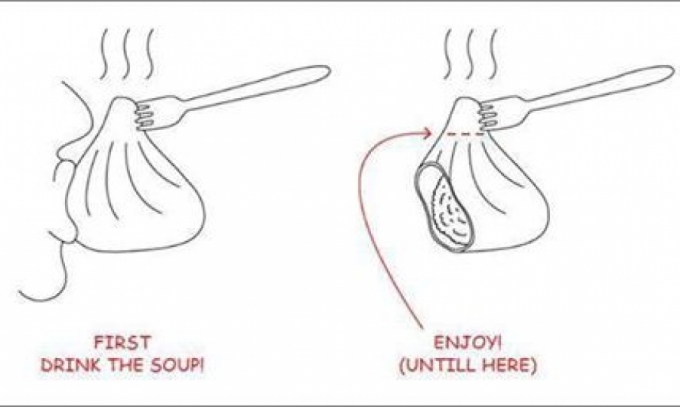